Digital technology thrives on a covenant of radical democracy that promises information for all.  The giants of technology market themselves on this egalitarian ideal.  From Google's corporate counter culture to Apple's fixation on design to empower the user, technology companies are founded and thrive on the idea of a future of individual empowerment.  People love them for it and self identify with digital technology companies in a personal way that is quite foreign to other consumer relationships.

Social norms have changed over the past five years.  Where once pulling out a smartphone demonstrated your importance and wealth, it is now a common gesture for pretty much everyone in North America.  We've passed a tipping point, the majority of people are on a computer connected to the internet all the time.  If you don't believe me go for a walk in any public place and see how many people are operating handheld computing devices. 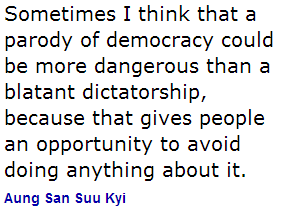 As the majority adopts digital platforms I've seen a consistent dumbing down of digital tools and content in order to reach as wide an audience as possible.  This is probably a complaint form many early adopters, but when I see simplicity and limitation rather than functionality and access begin to infect how we use technology in education I have to question the pedagogical value of our educational technology.

In order to cater to as many people as possible educational technology has created systems that hide much of what happens behind simplistic interfaces.  Can the promise of radical democratization of information survive when most people want to be spoon fed in the most limited manner possible?  Free access to material doesn't matter when most people only want to use the internet in the same, simplistic way.

Digital technology still presents itself with those early ideals of democratic information access and transparency, but like everything else as it matures it begins to develop a more pragmatic approach.  My feeling now is that these egalitarian, transparent technology companies are actually anything but.  No one that wealthy feels the need to be transparent, or to educate others.  When you are worth billions your goal becomes market share and monopoly.

Educational technology, as an offspring of the digital technology giants, suffers from this dogmatic stiffening of its intent.  Rather than focusing on individual empowerment and the promise of de-industrializing the education system they are happy to embrace dehumanizing, data-driven testing, especially if it offers ease of implementation.  If education technology isn't interested in offering users diverse, personally nuanced, highly adaptive, open ended digital learning tools in a transparent and universal access to information, then what hope have the rest of us in a consumer driven digital world?  We're preparing the next generation of drones.

We're in a position as educators and educational technologists to try and direct digitization away from closed systems with limited access to tools and information but the money infects our good intent.  Rather than focusing on diversity and acclimatizing students to the radical openness of the internet (something that, like the Wild West, may soon disappear), we preach walled gardens and monopolistic access.  We teach students to value limited access in order to train them for a future internet controlled by the rich and we do it because it's easier, not because it's better.

Between datamining users to support wrong headed standardized testing policies to simply fleecing student data to generate sellable marketing information, the flipside to education technology is complex and not particularly flattering.  As a teacher of technology I hope to empower my students with knowledge of how information technology works in order for them to remain independent entities in the brave new world we're creating.  For the other 95% who take no computer studies and yet live on this technology all day every day, I see a future every bit as dogmatic and limited as the industrial one we are now shedding.  In fact, it may be much worse because, unlike the punch card factory worker of the Twentieth Century who was reduced to a number for eight hours a day, dogmatic, digitized information demands your undying attention and submission 24/7/365.