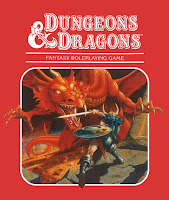 I've been a RPG (role playing game) player since I wandered into the original Dungeons & Dragons at eleven years old.  My adolescence revolved around marathon games when I wasn't working.  My first non-family road trip was a drive from Toronto to Milwaukee in 1988 when I was seventeen for GENCON, the original D&D and RPG convention.  For the next four years that trip became a staple of our August holiday, though the first time in a barely functioning Chevy Chevette stuffed with four of us was by far the most epic (and least likely to succeed). 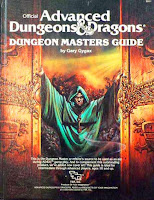 I quickly found myself in the Dungeon Master's chair when playing.  I had a talent for creating consistent, exciting worlds that balanced on a knife edge, often determined by the roll of a dice.  I was a  natural at paracosmic world building without realizing it.  When others took the chair they tried to force the story back on to their planned narrative if the dice didn't cooperate, which made the entire experience fall apart.  Random influences were vital for the game to become alive, a bad DM would break the forth wall when they tried to force the story back onto a planned track.

I recall one game where I'd planned out the evening in more detail than normal.  The beginning of the game was supposed to start with the players mocking Death (as in the grim reaper), and getting killed as a result.  The story would then continue in the after life.  But telling players they are just dead goes against everything the game is about, the dice have to decide, so I gave the last standing player a 1 in 20 chance of successfully assassinating death, assuming it would never happen, but it did.  I had to change direction and start laying track down in front of them in a new an unexpected direction.  I've seen a lot of classroom teachers stubbornly try to force a class not in the right mental space in the same fashion.

Those DMing experiences greatly influence how I teach in the classroom.  I keep the big ideas in mind, but try and lay down track in which ever direction students in the class seem intent on going.  One of the ways to feel like I'm not standing there unprepared is to put them in a transparent simulation.

Simulation is an edu-speak friendly word for what many of these students spend vast amounts of their free time doing.  World of Warcraft?  A massively-multi-player simulation (it often feels like a D&D table with a hundred people sitting at it).  Even online shooters reach into the RPG bag of tricks to introduce team based game play in a consistent simulation  that people find very engaging.

A simulation in class can often work to the big ideas you're going after, while giving students the power to get there themselves.  As I often say in class, "I could show you how to do it, but then you'd know how to ask me how to do it.  If you figure it out for yourself you're much less likely to forget it."  The sim lets students know the goal (so it's very backward planning friendly), but doesn't goose-step them through a process to get there.  By the time you're doing a summative you need them to find their own way through a forest they are now familiar with.

If learning is about developing a new way of getting something done then simulation is the ideal last step in summative assessment.  Before a sim you'd do the basics around concepts, language, skills development and make sure all students are in the ZPD.  Once the foundation is laid it's time for them to show what they can do, it's time for a simulation.  Nothing got me ready for that like D&D dungeon mastering did.
Posted by Timothy King at 5/19/2012 12:21:00 pm