The latest round of bankruptcy lawyers (the same ones who work with our bailed out banks) have shut down collective bargaining again in Ontario.  It looks like impending labour distress for any public service workers in Ontario because Dalton's Liberal government, that came to power with public employee support in the last election, has decided to go after populist, right wing, inaccurate US policy around public services.  Though the private sector caused a financial crisis, it appears that nurses, doctors, teachers, and emergency service workers will be paying for it.

Being a teacher, I'm most interested in how we're wasting money in education.  Fortunately, the UN offers all sorts of information on how Canada (led by Ontario - we have the largest population in the country) is performing world wide.

We are mid-pack on what we spend on education, but the results are world class.  We are outperforming everyone but Korea, Finland and China, and do it for less than Hong Kong, about what Finland pays and more than Korea pays.  Any country of similar background (Commonwealth, western democracy) offers an inferior, and often more expensive educational system.

The US, who Dalton seems determined to follow on educational 'reform', spends more and does less: 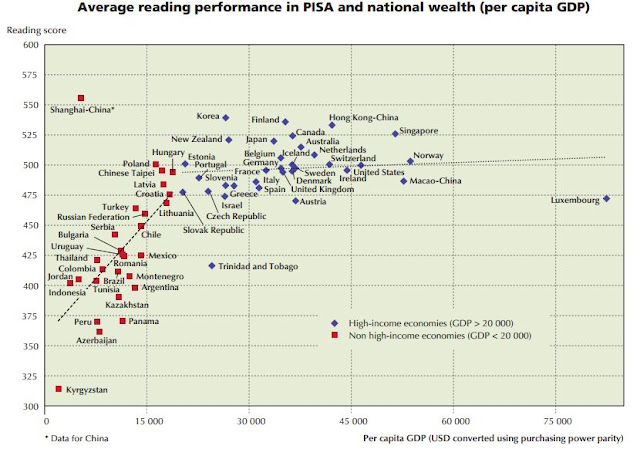 "The strongest performers among high-income countries and economies tend to invest more in teachers. For example, lower secondary teachers in Korea and the partner economy Hong Kong-china, two high-performing systems in the PisA reading tests, earn more than twice the per capita GDP in their respective countries. in general, the countries that perform well in PisA attract the best students into the teaching profession by offering them higher salaries and greater professional status."   http://www.oecd.org/dataoecd/50/9/49685503.pdf

With our government intent on gutting teacher's contracts and diminishing both what they earn along with their status as valued members of society (those public employees are just leeches, they don't provide value to the economy like 'real' jobs in the private sector do), we seem destined to lose our place as a finalist in world education rankings.

It appears that in Dalton's Ontario, when you do your job exceptionally well for a reasonable cost, you're a failure.  Perhaps we should have pushed the teacher pension into funding sub-prime mortgages.  When that happens federal and provincial goverments leap to the aid of the poor, ailing, private corporations that need their help.

Only when the injury is self inflicted does the government consider supporting it.  If you spend your days teaching children, saving lives or protecting society from itself, you've obviously been wasting everyone's time and money, no matter how well you've been doing it.

Head over to OBAMA POSTER MAKER to have some fun...