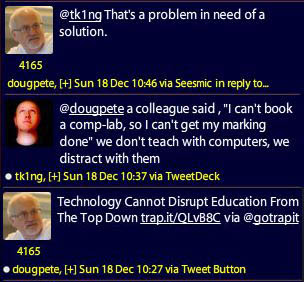 
The full non-twitterized quote was, "Great, I couldn't find a computer lab to book, now I won't get my marking done."  Implication?  You book a computer lab so the kids have something to do while you catch up on work.  You don't teach using computers, they are a way to keep students amused, distracted.

Anecdotally speaking, the vast majority of labs I walk by on any given day contain a teacher studiously ignoring their students, either on a computer themselves or frantically marking, while their students wander the internet looking for entertainment, the room aglow with the moderate cobalt blue of Facebook.

Last week we had a teacher angrily emailing because the labs he'd booked while he was absent had been double booked.  Implication?  I can book a lab while I'm away so the students have something to do.  Presumably there was work attached to the lab booking, but once again there was no teaching involved in it.  You book a lab so a supply teacher doesn't have to teach either.

This does a couple of damaging things.  First of all, it reinforces in student's minds that computers are only for entertainment.  If the teacher isn't actively involved in the use of computers in the class, if computer access isn't intrinsic to what students are learning, then we only reinforce the idea of technology as an entertainment/time waster.

I teach media arts in an Apple lab.  It seems like a dream technical teaching situation, but the difficulty in trying to get students cultured to vegetate in front of a screen to recognize all that they don't know, and use a computer for productive and/or creative purposes is agonizing.  It's like trying to get a morphine addict to recognize how small measured doses can actually help someone manage pain; they don't care, they just want to keep overusing it for their own amusement.

I want to thank all those teachers who use school computer labs as a distraction that encourages these bad habits.

Another problem is teacher computer literacy.  This is a major problem in the general public, and in teachers as well; people generally know how to do only a few things, and have no idea how what they use works, they certainly aren't experimental with their usage.  Teacher lack of familiarity with computer and internet use makes them poor facilitators in digital learning environments, and they aren't going to get much better at it if they treat computer lab time as an excuse to do work irrelevant to what students are doing.

If we're going to develop digital pedagogy, we need to be recognizing how digital tools can become vital components in learning and not merely a replacement for analogue options (ie: poster board/PowerPoint, pen & paper/word processor) that you can leave students with in a lab while you catch up on marking.

Left to their own devices (and they almost always are), students on a computer revert to simplistic habits: Facebook lurking, Youtube staring or the dreaded pointless online game/time-waster.  This disconnect also produces the vast majority of school computer vandalism, something that actively prevents us from buying more computers (because we have to keep repairing the under supervised labs we have instead of having cash on hand to develop diverse educational technology).

These are usually the first teachers who complain about lack of access, because they can't find themselves a period off.  As a teacher that has technology baked into their curriculum, these people make my job that much harder than it already is.
Posted by Timothy King at 12/18/2011 12:47:00 pm