back from the future

I'm just wrapping up a semester where I was asked to pilot the elearning version of the Career Studies, grade 10 half semester course. I was teaching all of the career studies in a school of approximately 1500 students. We have a workplace focused high school in our board, but it's far enough away that most parents opt to keep their children in the community at our school, as a result we have a full spectrum of students, all of whom must take this mandatory class.  The students in the open career studies course ran the gamut from highly at-risk and barely literate to students already attending lectures at The Perimeter Institute in Waterloo. The grade range ran from end to end (from 0 to 100%).

What follows is a review of the elearning pilot, with some supporting statistics and observations.


If I had to summarize quickly, I'd say that doing career studies in a hybrid elearning class was very useful. Students assume they know more about computers than they actually do (partly due to the fact that we keep telling them that they are digital natives). Doing elearning in a hybrid/introductory way does several things: 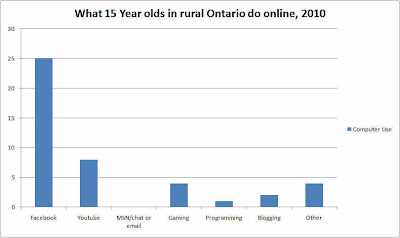 Any review of network traffic showed Facebook returning page views at a rate of 50 to 1 over ALL OTHER INTERNET TRAFFIC COMBINED. They are unable to turn it off and are constantly distracted by it. Turning it off at the router caused a minor uprising where they all suddenly appear to have grown Law degrees and a working knowledge of the Constitution.


This broke the myth of the digital native for me.  When I asked them to estimate their own expertise on computers, I (like most others) expected this:
... but I got this:
...which looks mighty similar to the ability curve you get in the general population.


This elearning course, the first for all of these students, pointed out a number of challenges:

How the course went: 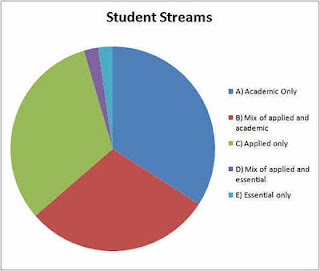 Doing it as an open/full spectrum course clearly shed light on what I've always found to be true; elearning's self-directed element is what kills it for most at-risk students. It introduces a medium between the student and the material that gives them an excuse not to do work, usually while clearly highlighting their lack of digital skills (which causes embarrasment and some difficult classroom management situations).

I did elearning in Peel, and as far back as 2005, Peel was aiming elearning at University level students who had shown a clear aptitude for self-directed learning and strong computer skills. Without either of these skills (skills I'd argue that are developed much more significantly in academic/university level classes), elearning is likely to result in very poor success rates, specifically in non-academic streams.


Unless we're going to focus on developing self-directed learning and digital competencies in non-academic classrooms it will continue this way.

As things developed, I had to go through the course, collect together all the summative pieces and print them out on paper for about 1/3 of the students in order for them to complete the required material. They did not have the technical skills to edit documents in a word processor and upload it to the elearning system, let alone keep their digital selves organized enough to find assignments they started (many never named files and copied over previous work with the same default file name).  There was little sense of continuity from class to class in these students, most of whom saw it as a Facebook miasma, rather than a course to pass.


A student's ability to organize becomes much weaker when I would find the vast majority of the machines a student brought to me with a problem running Facebook in the background (it's hard to stay organized, it's harder to stay organized when facebook constantly interrupts you with pointless trivia).

I think the real problem is the myth of the digital native. We got shown this last year. Have you seen it? This kind of thinking drives me crazy. Computer skills are taught, they aren't some kind of natural occurance based on your birth date. What this really is is fear. Older and/or less technically inclined people who feel overwhelmed by technology dress up kids today in this because they see them hop onto a computer without worrying about doing something wrong. Being familiar with something doesn't indicate skill. If you actually observe what they are doing, you'll see (as I did during this course) that weak students are digital serfs - they don't know how to do anything, solve anything or look into new things, they only know how to do one or two things (usually Facebook and youtube: the internet for the dim).

What's worse is that students who have developed real skill have it belittled when some Luddite says, "yeah, you guys all know this stuff, you're digital natives." (subtext: now I don't have to address it or waste valuable class time trying to teach it to you)

Digital literacy should start in the junior grades, and they should be developing specific skills (data management, media creation, file management). In grade 9 there should be specific digital literacy targets in core subjects, but there aren't (mainly due to a dirth of teachers who feel comfortable enough themselves to teach it). We expect them to know this stuff intrinsically, which is ludicrous.  21st Century skills will be much more vital to student success than 19th Century skills like sitting in factory organized rows listening to a teacher speak, but we don't teach them.

In the meantime, boards propagate the myth of the digital native that excuses us from addressing digital literacy as a serious issue (they showed us that video above at a staff meeting).

Familiarity with computers isn't a developed skill-set.  Self-taught digital skills are mostly just habit forming. Watching those careers students struggle with basic issues made me realize that elearning is really only designed for success for the top third of digitally literate students. The rest don't have the vaguest idea of what they don't know:

"I can't find my file"
"You've saved all of your files in the course as the same name and over written it again and again.  That is why you have fourteen documents called document(1), document(2)..."
blank stares... 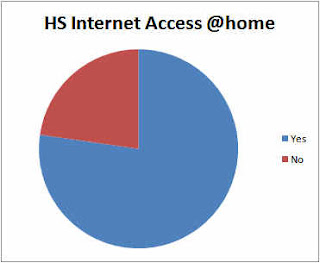 Even though perhaps a quarter of our students come from rural/farming backgrounds, high speed internet penetration is quite good. This is probably due to two main factors: it's now seen as a requirement for academic success (at home) and prioritized, and long range wireless (wimax, etc) has become standard in the area.


I suspect the real dividing line now is purely financial, which begs the question: when are we going to support students in getting over the digital divide? 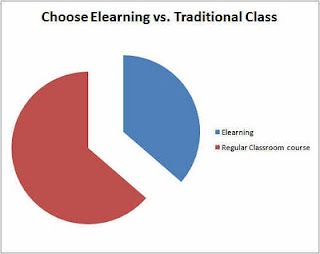 When given a choice about whether they could have taken this class as elearning or in a traditional class, almost two thirds opted for the regular class. There was a real lash back against using computers for something productive - it spoiled/interfered with their only purpose (Facebook/Youtube access).  It's hard to convince people that a toy is actually a tool. 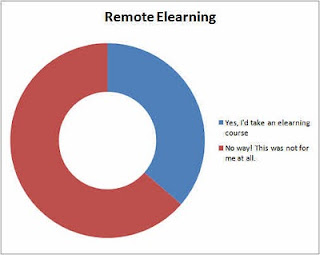 As you can see, the same students willing to take the course over again in a hybrid classroom, are also willing to kick the training wheels off and do elearning completely remotely. If they get it, they get it. 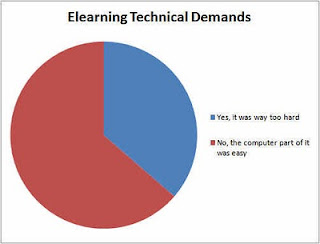 An interesting discrepancy between technical skill and willingness to self-direct learning. The whole student centered thing is still pretty new, but getting students to direct their own learning is like pulling teeth. This goes beyond juniors in an open careers class. My university grade 12 computer science students were just as unwilling initially. In their case it was risk aversion. They were so afraid of not getting the numbers they need to go to university that they had no interest in doing open research that wouldn't lead to a perfect result. 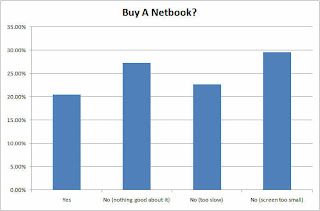 The last one is hardware specific. The netbooks were coveted at the beginning of the course, but their limitations quickly became apparent. I posted the most common complaints (too slow, though this had more to do with the school network than the netbooks, but the digital natives didn't comprehend that), and the tiny screen. Elearning is set up in long, texty pages. Students who aren't strong readers go bonkers trying to read it on a 600 pixels tall netbook screen. Stronger readers can deal with it (and remember what they're looking at), but for the weak readers, every scroll or paging action is another excuse to click on that Facebook tab and get hit by lots of disconnected, pointless information (the way they like it).


The course would have been better served by a device that rotates for reading longways, then rotates back for data entry (or a big square screen, I guess).

The raw data from the student survey is below. This pilot was a very useful program that shed light on all sorts of issues. I was happy to do it and would like to see it continue, but I fear that it uncovers so many holes that it will quietly disappear back into the ether. Here's hoping it doesn't.

If you have any questions, don't hesitate to ask. The data was collected from 52 students in November, 2010, and 46 students in the second week of January, 2011.

The raw data can be found here (Excel format):
https://docs.google.com/leaf?id=0B53Xb3MP_t-cOGYxZjI1NzItNjExZS00YzQwLTllMjYtNWJkMzgyMmE3YzUy&hl=en&authkey=CLqC08kH