The Digital Divide is Deep and Wide

The idea of computer technical proficiency has come up many times over the years on Dusty World.  Whether you want to call it digital literacy, digital fluency,  or twenty-first Century skills, there is obviously a big gap in the computer user skills we're graduating people with.  This isn't a new thing, I've been benefiting from this lack of fluency in the general public since the 1980s.

After dropping out of high school in the late '80s I started apprenticing as a millwright.  At our warehouse the new building control systems were becoming computerized and all of the very skilled welders and mechanics in our department were leery of them, so guess who got to take that on?  The new guy who had been working with computers since he was ten.

A summer job I got while going to university in the early 1990s involved converting an engineering shop over to computerized ordering (they'd hand written all parts orders and completed shipments prior to that, ironically while producing telephony computer electronics).  I got Lotus1-2-3 (which I'd never used before) working with the formatting so we could print out orders using our existing forms.  This took a bit of trial and error, but I wouldn't have described it as particularly difficult, it just took a willingness to make effective use of digital technology in problem solving.

After graduating from uni I continually found myself moved into technology implementation  simply because of this fluency I seemed to have that many people didn't.  This eventually led to me getting IT qualifications as a technician.  It even followed me into teacher's college where I found myself teaching other students software and has been a mainstay of my teaching career.

This week I came across a recent study that sheds light on all of this anecdotal experience.  The Distribution of Computer User Skills research across wealthy OECD countries point to some rather astonishing facts: 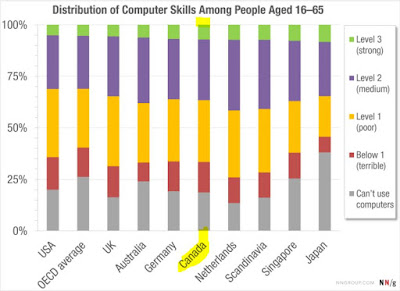 "Overall, people with strong technology skills make up a 5–8% sliver of their country’s population, and this is true across all wealthy OECD countries.

What’s important to remember is that 95% of the general population in North America cannot make effective use of computers in resolving even simple problems or overcoming unexpected outcomes."

Computer use isn't just poor, it's astonishingly bad.  Over a third of Canadians aged 16-65 can't do anything other than simple, rote, habitual work in a digital environment.  If asked to do tasks that I would consider straightforward and with no particular digital expertise, they are unable.  Keep in mind, this is only looking at the skills of work-aged people.  It's not even considering seniors who generally have much weaker computer skills - so the actual computer skill level in the whole population is even lower than this implies.

You're probably doubting your ability to be considered an advanced user in this study, but you shouldn't.  None of these tests involved programming or having to do anything engineering wise with a computer, it's all user focused work using simple software.  To be considered a strong (level 3) computer user you had to be able to "schedule a meeting room in a scheduling application, using information contained in several email messages."  If you've ever had a group of people email and work out a date for a meeting and then you've put that meeting in Google Calendar, you're considered a high end user.  If you're reading this online blog you're probably considered a proficient, level 3, high-skills user.

The article that started this leads on to another on the digital divide, but rather than hang it all on economic factors it also considers psychological and skills based limitations.  A few years ago I attempted to provide local households that said they couldn't afford one with a computer.  It was a complete failure - like giving books to illiterate people then wondering why they weren't illiterate any more; there is a lot more to the digital divide than economic barriers, though they no doubt play a part in it.  The fast evolving nature of technology means relatively recent computers are available often for free to people who otherwise can't afford them, but the problem isn't just access to technology, it's the inability of our education system to build sufficient digital fluency in our population to make use of them.  There is no point in handing out technology to people who can't make use of it.

With all of this in mind, who are we aiming at when we introduce digital technology into the classroom?  What are we doing when we pitch elearning at a general public who have this distressingly low level of digital fluency?  The vast majority of our students (fictitious digital native prejudices aside) are functionally illiterate when using digital technologies in even simple, user focused ways.  We seem to think we are graduating students who are able to make effective use of computers - except we aren't.  Many educators dwell in that level 0 to 1 poor user category themselves.


If our digital fluency were seen in terms of literacy, we're handing out the complete works of Shakespeare to illiterates and then wondering why it isn't working and why it's being vandalized.  At some point we'll stop dumping the latest multi-national prompted tech fad (ipads, chromebooks, whatever) into classrooms and start teaching a K to 12 digital skills continuum so people can actually make use of the technology we provide.

Last week one of my essential students intentionally punched and broke a Chromebook in my classroom.  This made me quite angry because I saw a useful and expensive digital tool being broken.  After reading this report I can't help but wonder if he was just breaking a thing that he can't do anything useful with that frustrates him.

“Educational technology has failed to move the needle on either cost effectiveness or student success in the past ten years…” - Brandon Busteed, Gallup Education
(they were talking about this in Phoenix in 2014)