You Didn't Prepare Me for Post-Secondary 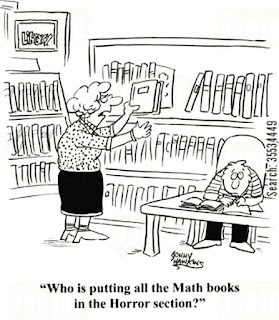 Over the past several years I've been contacted by graduates or their parents with a similar complaint:  why didn't you prepare me/my child for post secondary math?

A few years ago it was a college bound student with learning challenges.  His mom was... outspoken (that's being very charitable) while he was in school, but I was able to work well with him and he eventually went into information technology at a local college.  He dropped out in his first semester with failing maths grades.  Mom emailed me in a rage blaming me for this.  I pointed out that I teach computer technology and asked how he was doing in those classes (he was getting 90s).  That ended that particular interaction, but it wasn't the first and it won't be the last.

I've also had students who I worked closely with both in class and on school teams, students who know me well enough to be straight up, get in touch while in post-secondary to say that they too are struggling with maths.  It's a familiar refrain; a student who got high 90s in high school maths suddenly finds themselves dysfunctional in post secondary.  A recent multi-award winning graduate put it well: "when we're given a problem, other students apply their maths skills like taking tools out of a toolbox.  They assess the problem and then apply the right mathematical approach to solve it.  I feel like we spent all our time learning mechanics on worksheets but spent no time contextualizing what we were doing."  This would be like trying to learn how to play hockey by drilling yourself independently on stick handling, skating and shooting, but never contextualizing those skills as a whole in a game.

When some of our most academically decorated students come back to me with this kind of feedback, I'm left wondering how to address it.  I don't think it's fair that the blame falls entirely on teachers.  Thanks to our community's everyone-can-go-to-university-if-they-want-to sense of privilege, many of our academic classes are populated by students without the background or interest in using what we're trying to teach them.  This means teachers have to simplify and compartmentalize their content to such a degree that the students who actually need it aren't getting it.  I frequently see students with weeks of absences who are still expected to earn a credit (you got auto-dropped at 10 absences when I was in high school).  When you've got students who barely attend, compartmentalizing the learning becomes a survival technique.  It also makes it nearly impossible to contextualize learning beyond single period lessons.

Last year my son was told, "don't worry, everyone fails that unit" in his grade eleven maths class.  If I had a unit that everyone failed, my first assumption would be that I'm teaching it wrong and I'd change my approach, but one of the ways we appear to drag students to the end of the Ontario maths curriculum is to just keep pushing through it, regardless of comprehension, context or mastery of previous concepts.  This isn't a new phenomenon, it happened to me in the 1980s too.

I'd quote statistics to you about how successful our graduates are once they leave the building, but no one in Ontario public education keeps those statistics.  Instead of quoting EQAO scores, what we should be doing is collecting data on the success rates of our graduates in post-secondary.  If we all claim to be about backward design, this kind of data would make that possible on a meta-level, but it's better to fly blind, then we don't have to take responsibility for those failures or change anything.

There is a lot of talk around destreaming as a cure-all to systemic prejudice, but the people framing it that way are usually the ones happy to see larger class sizes for everyone at a lower cost.  Streaming wasn't designed to denigrate anyone, it was instituted to let classes focus on learner needs with higher needs students having smaller classes and students aiming at advanced post-secondary programs working in a room where everyone is driving for the same goals.  The unfortunate truth is the destreaming has already occurred thanks in large part to parents and guidance ignoring it.  When I last taught university level classes I found that less than half the class was university bound and a number of those directionless students were put into university stream to 'keep their options open'.  In keeping their options open these students were knocking others out of contention.  In curriculums like English and mathematics, where skills development is vital in order for students to operate at the senior end of the program, this kind of watering down of intent hurts many of our graduates.

Even in my technology courses I see this.  My 'M' level courses are supposed to be for post-secondary bound students but I typically see 10-20% of the class coming out of credit poor essential and applied situations who have no intention of going into post-secondary.  I then spend an inordinate amount of my time catering to these high-needs children instead of helping the students who selected the right stream get to where they want to go.

I'm not sure why, with the pressure to reduce costs, we're not offering alternate pathways that allow the students who don't need senior classes to take alternate pathways.  An early graduation workplace/apprenticeship pathways option for students should be available for anyone who has passed the literacy and maths testing in grades 9 and 10.  If those students who would rather be out working were, we could refocus our classrooms on preparing the students in them for post-secondary success instead of watering everything down in order to babysit those who don't want to be there.  Instead we're all handcuffed by Ontario's learning until eighteen law.  If we're all really advocates for life-long learning, then it should be obvious that this doesn't just happen in schools.  There would be many benefits to stepping away from this mandatory restriction and refocusing our classrooms on developing rich, contextualized learning opportunities for students who show up and want to be there in order to go on and tackle post-secondary specialities.

This issue goes well beyond maths, but the structured development of skills over many years in mathematics exacerbates the problem in ways that make it much more visible.