This week I brought some 360° cameras to the 2017 ECOO Conference to show how (kind of) easy it is to make immersive media for virtual reality viewers like Google Cardboard.  I brought along my favourite 360 camera, the Ricoh Theta (physical controls, good shape, very intuitive to use, easy to manage and produce files), and some others: 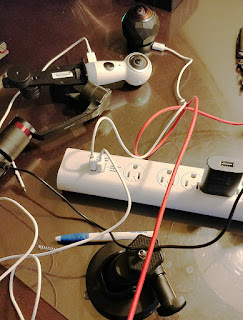 360° cameras offer a unique opportunity to capture a moment in a way that hasn't been possible before.  When combined with immersive VR viewers like Google Cardboard, full systems like HTC's Vive or upcoming Google Daydream platforms, 360 video and photography allow the viewer to inhabit the media, looking out into it as a part of it rather thank peering at it through a framed window as we've always done before.

This lack of perspective, framing or directional intent makes 360 video and photography a very different medium to work in.  The tyranny of the director's eye is gone, leaving the viewer to interact with the media as they see fit.  This is both good and bad.  If you're watching a film through Steven Spielberg's director's eye you're seeing it better than you probably could yourself; you benefit from that framing of a narrative.  If you're looking at an Ansel Adam's photograph you're experiencing what he saw and benefiting from his genius in the process.  That eye and the ability to effectively use a medium to demonstrate it is what makes a good film director or photographer, but 360 media tosses all that out.

The irony in all of this is that being a good 360 director has more to do with setting a scene and getting out of the way than it does with framing everything just so.  It also means that if your viewer has a trained eye they can find moments in your media that you might not even have intended.  It also means that if the viewer of your 360 media is technically incompetent or has the visual standards of an amoeba they won't find anything of value in it at all.  Suddenly the audience has a lot of control over how effective your media is when you're shooting in 360.

The examples below show just how 360 images can be directed like former 'windowed' media or left open and viewer directed:

When the media maker directs your view (these are screen grabs of the 360 image below the windowed photos), you see what they want you to see: 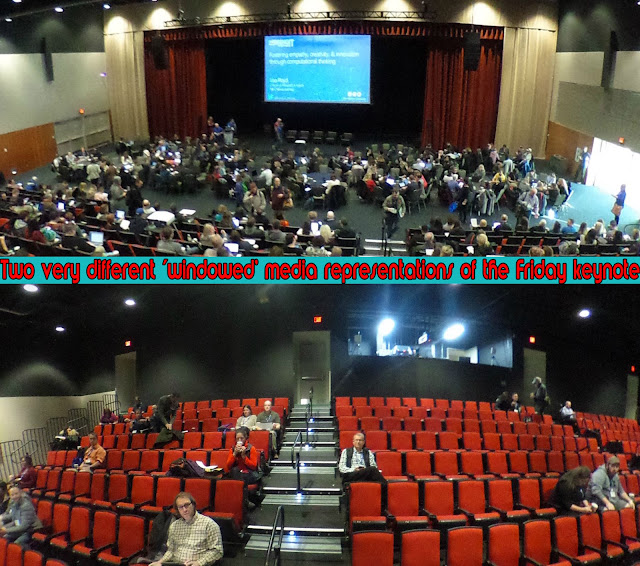 Or you can produce 360 media that the viewer controls that maybe tells the whole story.


Teaching visual intelligence will become much more important in the future if 360 media and immersive virtual media viewing become the new norm.  If your audience is too visually ignorant to make effective use of your media they won't recognize the value in it.  I wonder if you won't see directed views of 360 media done by people who can still provide the majority of people who aren't interested in building up visual media fluency the chance to enjoy media at its maximum effectiveness. 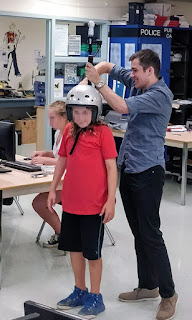 Beyond the director/audience change in power there are also a number of challenges in producing effective 360 media.  The biggest problem is that the camera sees everything, so you can't have a crew out of sight behind the lens because there is no out of sight.  We've gone to ridiculous lengths in producing 360 video for our virtual school walk through in order to try and let the viewer feel like they are immersed in the media without drawing their attention to the apparatus that is being used to create the media.

Tools like GiimbalGuru's 360 friendly gimbal that minimizes wobbles that are much queasier in immersive VR viewers than on screen help the process.  This gimbal is 360 friendly because, unlike other camera gimbals that block views to the sides and back, the GimbalGuru 360 is vertically balanced and so stays out of the shot.  One of the issues with the Samsung Gear is that the short handle means you have a lot of hand in any photo.  The shape of the Ricoh Theta minimizes that problem.  A good 360 camera should be stick shaped to minimize hand in the shot. 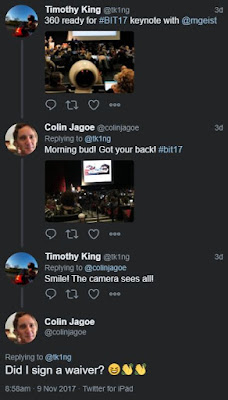 The last piece on 360 media making concerns the audience.  At the ECOO Conference keynote the ever aware Colin Jagoe asked the obvious question, did you get everyone to sign waivers?  It's a question you see on lots of people's faces when they see you take a 360 photo or video.  The answer to this runs back to the idea of a director or photographer directing the viewer's vision.

The assumption they are working under is one that has been drilled into us subconsciously by the directed, 'windowed' media we've had up until now.  If someone points a camera at you it is about you, at least mostly.  If someone takes a 360 image in the same moment you are just one of many possible focuses in that image.  If I had any advice for those pursed lips I see whenever I take a 360 media image it would be, 'chill out, it's not all about you.'

The law around this is fairly straightforward:  "when people are in a public space, they’ve already forfeited some of their right to privacy... Generally, as long as the images of people aren’t offensive, defamatory or unreasonably invade their privacy, you don’t have to get every person in the crowd to sign a release."

360 media, because of its lack of point of view, is even less likely to invade anyone's rights to privacy, especially if you're taking an image in a public space with many people in it.  It's going to take a while for people to realize that 360 media isn't all about them just because they happened to be in the vicinity when it occurred.  The short answer to Colin's question on Twitter is easy, "I don't have to get a waiver from you dude!"

There are a number of production and social issues around 360/immersive media and I'm sure we'll be working them out for years to come.  Spielberg is currently working on the VR futurist movie adaption of Ready Player One, coming out in the spring.  He is developing a lot of VR/immersive/360 content for that film - it may be the first big budget picture to really embrace immersive 360 media.  I imagine he's working through a lot of these problems in post production (green screening out the crew in 360 shots?).

I haven't even gotten into the technical requirements of 360 media production.  If you think hi-def 'windowed' video makes a lot of data, 4k 360 video will knock you flat on your back.  The 8k camera I've yet to get going requires such a strange, high performance SD card that I've had to special order it.  The camera is going to use tens of gigs of data to make even short videos and post-processing on even a decent desktop computer will take 15 minutes for every minute of footage.  Working in high def 360 footage is very storage and processor heavy work.


All of this will get sorted out in time and the benefits of immersive 360 media are obvious to anyone who has tried it.  We discovered that Google Street View is now available in Google Earth VR while we were demonstrating it at the conference.  It rocked people to suddenly find themselves standing on a street in Rome in 3D high definition detail.

In the meantime I got to experiment with this emerging medium at #BIT17 and really enjoyed both my time catching moments with it and swearing at how awkward it was to get working.  My next goal is to exercise my new UAV pilot qualifications and explore 360 media from an aerial perspective.  Hey, if it was easy everyone would experiment with emerging digital mediums.

Here is some of our 360° media from the ECOO 2017 Conference in Niagara Falls:

Using the time lapse function (one image every 10 seconds) on the 360Fly camera, here's a morning of VR demonstrations at Minds on Media on the Wednesday of #BIT17

My 13 year old son Max takes you on a virtual tour of Minds on Media on Wednesday morning using the Samsung Gear360 camera and the GimbalGuru mount to steady it.


Pushing the limits of the GuruGimbal and Samsung 360Gear - a motorcycle ride around Elora.  If you've got the patience for how long it takes to process in the Samsung  Action Director software it produces some nice, high definition footage.


360 Photography on the Ricoh Theta: 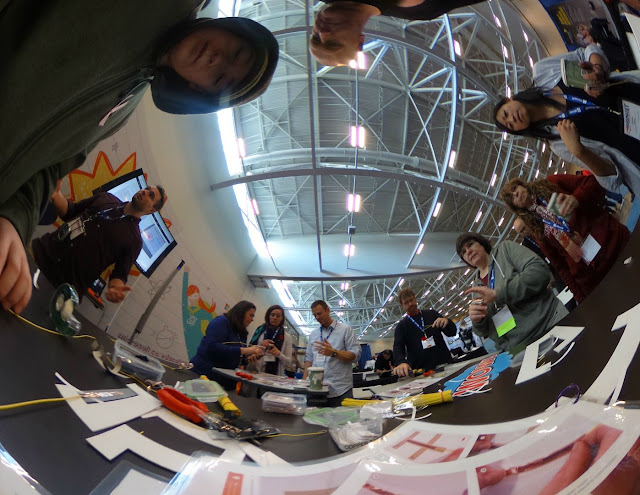