Being one of the first to set up virtual reality in our area, I've had the pleasure of putting hundreds of students in it for the first time.

When they first find themselves in Google's Tiltbrush, students tend to either scribble in 3d, write in space or, on occasion, try and build something intentionally three dimensional because they're realize where they're working.  With a steady stream of students trying it for the first time on Thursday, this kept happening until something different occurred.

When you get a student who knows how to draw they tend to sketch quite effectively in the virtual space, though it tends to be based on 2d thinking (like they're drawing on paper).  We had a girl who had never tried VR before but obviously knew how to sketch enter the HTC Vive virtual space, but rather than working in 2d she immediately began sculpting 3d shapes.

Grade 8 Tilt Brush No Watermark by gking53 on Sketchfab

This immediately caught the eye of the gifted grade 12 I had operating the system.  He got our attention and we watched her build out complex, identifiable 3d shapes.  What made it more amazing was that she was doing this without moving her head.  She was drawing in 3d but from a 2d perspective without even seeing what she was doing.  Everyone around the VR sets stopped what they were doing to watch something special.

Afterwards her teacher came up to me and said she was ASD and not very verbal.  I imagine the school system sees her as an expensive non-standard student but what we saw was a kind of genius.  Our gifted VR operator certainly thought she was exceptional, and not in a bad way.  Perhaps it requires an exceptional intelligence to recognize another exceptional intelligence.

***
On Saturday my family attended the POND Network's family day at UofT.  Having kids can often act as a kind of mirror, showing you more about yourself.  Having an autistic son has made me more aware of how neuro-atypical I am (I've learned coping mechanisms, but they aren't my natural state).

Where other people seem to require social interaction in order to be happy, I am very much an introvert.  There are few cases where I find people who engage rather than drain me.  I tend to go to ground after a week of teaching because I'm all peopled out.

The research presented by the Ontario Brain Institute was very interesting, and frustrating.  Google has been doing fantastic open source computing work doing the heavy lifting with sequencing genome data for neuro-atypical brains, but the process is still in its infancy.  We need much more data from more people and faster computers to narrow down the genomic complexities of neurological issues like ASD.  The current thinking is that ASD isn't caused by one or even a few genes, but by complex interactions between hundreds of them.  Understanding this process will require many people providing data to a massive computing effort. 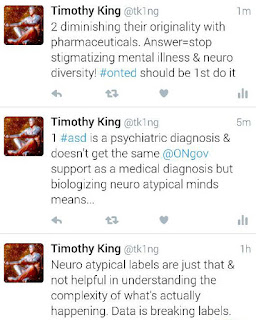 A moment occurred in the presentations when a parent asked how close they are to being able to give a biological rather than psychological diagnosis for ASD.  He asked because students with a physical disability will have the earth moved to be accommodated, but students with psychological disabilities are generally warehoused and ignored, especially if they aren't problematic.  The example he gave was in education, where a school will spend tens of thousands of dollars on ramps and elevators for a student in a wheelchair to be able to access the building and integrate with their peers, but won't offer a fraction of that to a student with a neurological issue.  This got a round of applause from the audience.

The speaker had an even better answer.  She said this is awkward because she's a psychiatrist and the issue isn't whether or not this is a physical or mental diagnosis but instead an indictment of the government and society in general's stigmatization of mental illness.  It doesn't end at mental illness though.  If you aren't neurotypical, you aren't accorded the same rights and access to care.  The goal should be to enable all people to reach their potential, the type of diagnosis is irrelevant.  This got a big round of applause too. 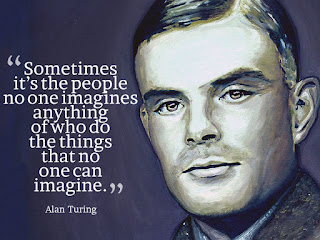 It also raised some hard questions around how we treat difference of thought.  My son has a great deal of trouble organizing and completing linear tasks, but he can make diabolically difficult lateral connections.  Having a conversation with him will force you to think laterally in ways you never had before (unless you're too stupid or lazy to make the effort, in which case he sounds nonsensical).  I'm a pretty good lateral thinker, but the connections he makes are astonishing, yet he's considered substandard because he's not at the level of his peers in a loud, socially driven classroom.  He almost failed French because he wouldn't speak it in front of the class - the kid with social anxiety and ASD wouldn't perform like the other kids would.  He's sat in a desk in a row in a crowded, loud classroom with neurotypicals who thrive in this environment, and then he's told he doesn't stack up to them.  Their accommodation is to give him access to a support room twice a week.
I often think that if the school system doesn't destroy him, my son is going to grow up to do something exceptional precisely because he doesn't think like everyone else.

Last year at a Head's meeting I suggested that neuro-atypical people should be in teaching.  They will cause it to change by offering different approaches that might improve the system as a whole.  Our head of guidance thought this was ridiculous.  Outliers shouldn't be teaching or even in education.  Education should be about moulding students to society's expectations.  I've never felt more disenfranchised by the education system than I did at that moment, and I've frequently felt disenfranchised by it both as a student and a teacher.  I guess people will always find a systemic reason to identify and diminish another group of people for their own benefit. 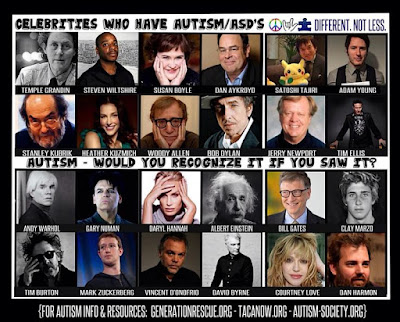 When my son was first diagnosed with ASD I was hoping for a cure, now I believe that he isn't thinking incorrectly, just not the same as most people, and that can offer us all a social advantage.  It would be very shortsighted of us to try and stamp out that difference.  His ability to make lateral connections of thought might one day allow him to solve a problem in a way that no one else could even conceive.  This is assuming the education system doesn't beat it out of him.  Instead of exploring his differences of thought he's repeatedly forced to perform neurotypical tasks in a substandard way and then rebuked for it.  There is no point in his day where he's allowed to explore his intelligence in the way that a gifted student is because his mode of thought is deemed foreign.

A good place to start would be to take away the distinction between physical and psychological diagnosis and treat all students to the same support.  That might mean breaking down the systemic, grade based process of education by introducing purely individually driven learning goals and achievements.  My son may not graduate on time because the system he is in seems designed specifically to not work with how he thinks, but he'll get there eventually, and it would be nice if he wasn't constantly being told he was a failure when he does.  The chances of him going on to develop his unique talents in spite rather than because of his education would be much greater if he doesn't feel like the rest of society thinks him a loss.

Education, like socio-economic status, is an invented sense of superiority.  If you do well at something designed specifically for you, have you really done anything of value?  If you struggle to do well in a system specifically designed to work against you, are you a failure? Neurotypicals might not be able to use their customized education to grant themselves social advantage any more, but can you imagine an education system in which every student was able to minimize their weaknesses while maximizing their strengths without some shortsighted idiot judging them?  The human race would flourish in the diversity of ideas that would bloom from those graduates.  We only have to get past our prejudices to get there.

***
Austim & History - where would we be without these people?
8 Inspiring People with ASD


Putting Students into VR for the first time shows many ommonalities, and exceptionalities...