A while back I tried to wrap my head around tablets and why they are so popular.  I struggled using an original ipad and eventually gave up.  A bit later I had an opportunity to use a windows tablet and almost broke it across my head in frustration.  I'm a tech savvy type, so I kept at it.  If tablets are so great, what wasn't I getting?

This past year I got my hands on an Asus Transformer - the tablet that would convince me that tablets are handy (because it also comes with a keyboard).  It only convinced me that Android has a long way to go in being a tablet OS.

I've got an ipad2 and the Asus Transformer floating around my department waiting for robotics to start, so I offered them out to my staff for test drives.  18 emails requesting the slower, lower memory, single tasking ipad, one saying either would be fine (he got the quad core multi tasking Asus).  Marketing works.  Perhaps that is the key to tablet success. 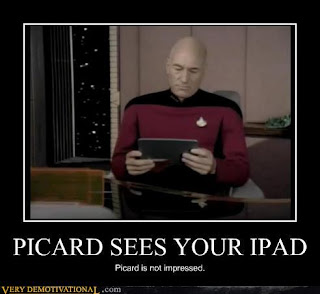 The sell on tablets is a hard one.  You're getting epic style (yes, Picard has epic style) along with interweb access.  I want to be peppy, mobile and look like I come from the future!  I want a tablet, right?

Turns out I don't.  After trying and trying to tablet up, it just isn't sticking.  It appears I'm at an impasse when it comes to tablets and how I use the internet.

When I go online it's a full contact sport.  I like to get into many things simultaneously (that knocks the ipad out), I'm constantly taking pictures from one thing and slapping them into another.  I'm in and out of photoshop, dreamweaver and other processor heavy software, I want lightning fast responses, the ability to create media on the fly, a keyboard that rewards me for years of learning how to touch type, and a screen that offers a clear view of as many full colour pixels as I can lay my eyes on.

I expect to be able to toss something I found online onto my twitter feed or Facebook or linkedin, or flickr or evernote, or Ning, or Edmodo or any of a million other online tools without having to wonder if it'll copy and paste this time or not.

Touch screens drive me bonkers.  Until I'm getting Iron Man like performance from my 3d touch interface, I'm not interested in taking stabs at data to see if I can pick them up over and over again.  Watching people do this on tablet baffles me, they seem content to have to attempt the same action over and over again, resigned to it - the inefficiency drives me batty.  The fact that you look like a lost mole looking for a hole makes me snort in derision!

Then there's the screen itself.  I'm the kind of guy who cleans the windscreen in his car often (or his glasses before he got the lasers).  If I have to look through it, I want it pristine.  Peanut butter encrusted high def screens hold no interest for me at all.  Even a plain old finger print smudge makes me wonder why you'd pay for the high-def screen in the first place.  I'm a visual person, I want my digital window to gleam.


Tablets are for people who like to watch, spectators.  If you are a passive web media consumer, I'd suggest going back to TV, but if you're determined to lurk, tablets are a good fit for you.  You look nice, but can't do much; we're back to the high heels again.

If you're an active web user, someone who produces (and by produce I mean generate media, not merely be a retweeting machine) as much as they consume, then you're going to find that the all show
and no go reality of tablets frustrating.

There is no single moment where I've wished for a tablet when I've had my ultrabook handy.  Light, fast and fully capable, and running on a full/real operating system instead of the dumbed down mobile OSes on tablets; that is where my proclivities lie!

If I have to have a tablet at all, it's a phone and it fits in my pocket.  It has a good camera, can get me online in a pinch, the batteries last all day and it doesn't run so slowly as to drive me around the bend.  I'll live with the lame mobile OS until they get better and it'll do everything I'd ever need a tablet for without spending hundreds of dollars on a redundancy.

At any other point, when I really want to hit the web, I'll turn to the laptop.

Tablets might be a good fit for how you go online if you're a freaky lurker, but otherwise stay clear!  You'll look great using them, but you won't actually be doing much.  If that's your M.O., an Apple genius is waiting to take your order.
Posted by Timothy King at 18:10